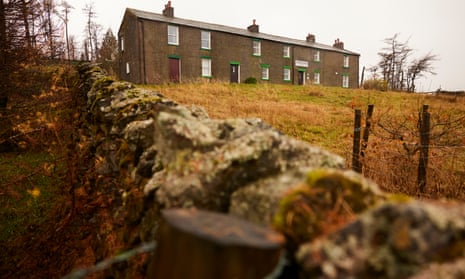 Skiddaw House on the market for first time, along with 1,214 hectares of Lake District land – including three mountaintops

In popular fiction a century ago, it was described as “one of the loneliest dwelling-places in all the British Isles” and was the setting for a wild and melodramatic murder.

The estate agent selling it today more positively describes it as an “inspiring, one-of-a-kind property” but concedes it is still “the most remote house in England”.

Skiddaw House, a former shooting lodge built by a land-owning nobleman in 1829, is being sold along with 1,214 hectares (3,000 acres) of stunning Lake District land, which includes three mountaintops.

A sealed bidding process closes on Wednesday and viewings are tricky. The shortest walking route is from the small village of Threlkeld and takes about an hour and 20 minutes, with waterproofs, map, compass, whistle and torch all advised. A more scenic two-hour option would be to start in Keswick.

A car would not last 30 seconds on the narrow, craggy, winding track up the mountain to Skiddaw House.

It is reachable in a 4×4 and the Guardian was this week able to visit thanks to the off-road Can-Am Traxter buggy used by the vendor Gavin Bland, a Cumbrian sheep farmer. “It’s not always as grim as this,” he said cheerfully as the driving rain lashed down and Herdwick sheep watched on, bemused.

Bland bought the house and land privately in 2015 and is selling with no idea, he admits, of whether he will be successful.

The house alone came on to the market in 2021 and became something of a Rightmove online sensation, one of the year’s most viewed properties by people idly dreaming the dream.

But it failed to sell. The remoteness, a four-mile mountain walk to the nearest pub; the off-grid nature of life; the fact that it is leased on a peppercorn rent to a youth hostel foundation until 2027; and the price tag of about £1.5m perhaps all combined to put buyers off.

Now the land – breathtaking even in mist and rain and which includes the sweeping, treeless Skiddaw Forest and mountain peaks of Skiddaw, Great Calva and Little Calva – has been included.

It is “one of the largest areas of the Lake District national park ever to be sold,” said Andrew Wright, the head of Mitchell’s Land Agency which is organising the sale. It is also the only time Skiddaw House has been on the open market since it was built. “We expect a lot of interest,” said Wright.

No price tag is given but the Guardian understands it is in the region of £10m.

“How do you value somewhere like this?” asked Bland. “You can’t value it. There’s nothing to compare it to. It’s what someone is prepared to pay for it.”

Skiddaw House, 457 metres (1,500ft) above sea level, was built as a grouse shooting lodge in 1829 by the third Earl of Egremont, George Wyndham, a nobleman whose main house was the spectacular Petworth House in West Sussex.

The novelist Hugh Walpole was particularly taken by Skiddaw House, setting a murder scene there in his 1932 novel The Fortress. It is “one of the loneliest dwelling-places in all the British Isles”, he writes, “the only building from Threlkeld to Dash”.

The boundless heather and “the hostile crags” he writes about, are of course still there today. As is the impressive house. Where else would you kill a cousin you had contemptuously loathed since childhood?

Over the decades, shepherds have come and gone. The longest resident was Pearson Dalton whose departure from Skiddaw House was the subject of a Guardian Country Diary in 1969.

He was there for nearly 50 years with his goat, cat and dogs, it said, until compulsorily retired by his employer, fearful that “should anything happen to the old man of the mountains he could be without help for days”.

The land is, Bland said, “the best hill farm in the Lake District, it is the best sheep fell in that it’s got a bit of everything. There’s no bracken.”

The property was empty in the 1970s, falling into disrepair, until it was converted in 1986 into what is now Britain’s highest youth hostel.

Most of the Lake District is owned by big estates or the National Trust so to have such a large slice of privately owned land on the market is unusual. The land agents and Bland believe it could provide an investment opportunity in environmental and habitat protection. “It could interest everyone from a grouse shooting enthusiast to a rewilder, and everything in between,” said Bland.

If the bids aren’t what he is hoping for, then so be it, said Bland. “I don’t have to sell. If it doesn’t sell, it doesn’t sell … there is no point in me dropping my price. It will just be another 100 years before anyone gets the chance to buy it.”